Interested in joining our parish family?  We are glad that you are!  Below, see the column that pertains to your current situation for more information! 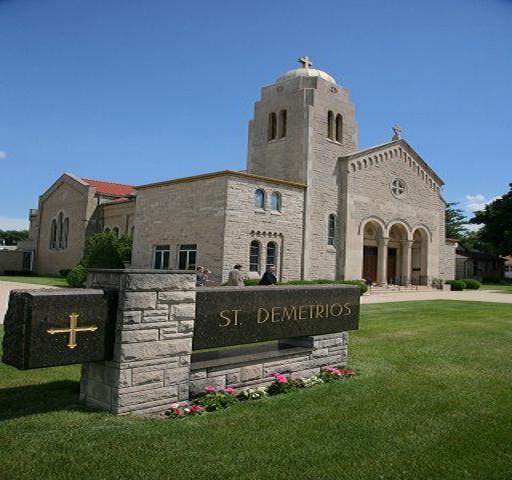 If you have any questions regarding joining Saint Demetrios, please contact our pastor.

If you are interested in joining the Orthodox Christian Church (whether as a member of Saint Demetrios or another parish), there are generally two paths, one for Christians already baptized in the name of the Holy Trinity in another tradition (Roman Catholic, Protestant, Anglican/Episcopalian) , and one for persons coming from a non-Christian religious tradition or no religious tradition.  These are described below.

1.  Coming to Orthodoxy from another Christian tradition.  By "another Christian tradition" we mean those Christian churches that baptize members in the name of the Holy Trinity: Father, Son, and Holy Spirit.  This includes Christians of the Roman Catholic tradition (and those in communion with Rome, such as Byzantine Rite Catholics, Melkite and Malabar Christians), the Anglican Communion (including the Episcopalian Church of the USA), and most Protestant church traditions.  If you have not been baptized in the name of the Holy Trinity, the process for joining the Orthodox Church will likely more resemble coming to Orthodoxy according to the second point below.  If you are uncertain about your baptism, consult our pastor who can assist you.

Joining the Orthodox Church from another Christian tradition entails a period of instruction about Orthodox doctrine and tradition, culminating in the service of initiation called Holy Chrismation.  As there is "one baptism" into Christ, this is never repeated for persons baptized according to the manner prescribed by Jesus Christ: in the name of the Father, and of the Son, and of the Holy Spirit.

The length of this instructional period and the timing of initiation is tailored to the needs of the prospective member, based on their understanding of Orthodox faith and life, and directed by our pastor.  We do not expect new members of the Church to be theologians, but there are some "basics" we would expect you to have regarding Orthodox living and faith.  During this time, prosepctive members are expected to attend church services and participate in ministry programs as appropriate.  This is discussed with the pastor.

The period of instruction may extend from weeks to months, or even more--since the prospective member's final decision to be initiated may take some time.  Once initiated by Holy Chrismation, the person is a full member of the Orthodox Church.  Membership in good standing entails formally becoming a steward of Saint Demetrios or other parish.

2.  Coming to Orthodox from religious traditions other than Christianity or no religious tradition.  Basically, this category consists of all persons who have not been baptized in the name of the Holy Trinity: Father, Son and Holy Spirit.  In many cases such persons may be coming from non-Christian faith traditions (Judaism, Islam, Hinduism, etc.) or no religious background at all.  In some cases, persons may be coming from faith traditions that resemble or consider themselves Christian (such as Mormanism, the Church of Jesus Christ and the Latter Day Saints, or Seventh Day Adventists, Christian Scientists, and so forth) that do not baptize in the name of the Holy Trinity.

In the process of becoming an Orthodox Christian, such persons will undergo a period of instruction in the teachings of Orthodox Christianity tailored to their specific needs at the direction of our pastor.  During this time, prosepctive members are expected to attend church services and participate in ministry programs as appropriate.  This is discussed with the pastor.

If you are a baptized/chrismated member of the Orthodox Church, becoming a parishioner at Saint Demetrios is very easy in most circumstances (there are some special cases that are mentioned below after the steps of joining).  We would like you to take the following simple steps:

1.  Introduce yourself to our pastor and speak with him.  He would like to know you and how we may better serve you!

2.  Pledge your financial commitment to the parish (free will offering, no dues and no specified minimum) by using the link to the left, "Stewardship Online", or by filling out a Stewardship Pledge Form available at church, or by contacting our Parish Office.

If you intend on maintaining memberships in more than one parish, that is permitted.  However, please note that according to our Archdiocesan Regulations, a person may only serve on the Parish Council of one parish (after being a steward there at least one year).

For our membership registry, some information will be requested: baptismal/chrismation dates of members of your family, and so forth.  If you do not have this information from the start, don't worry--our pastor can help obtain it.

If you are transferring from another parish following a change in residence or other reason, it is helpful to ask your previous parish priest for a "Letter of Good Standing" indicating some vital information regarding your membership in the Orthodox Church (as in the paragraph above).

There are certain instances where becoming a member at Saint Demetrios is complicated by the fact that membership in our parish also means becoming a member of the Greek Orthodox Archdiocese of America under the jurisdiction of the Ecumenical Patriarchate.  If these cases apply to you, you may still become a member if you so choose, but it may require some additional steps that you may discuss with our pastor.  You may also choose not to formally become a member at Saint Demetrios since doing so may affect your status in another parish or Orthodox jurisdiction as explained below.

1.  Prospective members from Oriental Orthodox traditions.  In some cases, certain "Orthodox" churches are not in full communion with other "Orthodox" churches.  For example, the "Oriental Orthodox" (Non-Chalcedonian) families of churches such as the Coptic, Ethiopian and Armenian Orthodox Churches are not in full communion with the "Eastern" (Chalcedonian) Orthodox family of churches such as the Greek, Russian, Serbian Orthodox Churches to which Saint Demetrios belongs (though we pray this will not last much longer and progress in this area is being made).  Joining Saint Demetrios (or any parish of "Eastern" Orthodox jurisdiction) means leaving your previous church.  If you are uncertain about this, please speak with our pastor.

While you may choose to not enter into the communion of the "Eastern" Orthodox Church, you may participate in many of our ministry programs (such as our Adult Religious Education programs, youth programs, etc).  These generally would not involve matters where the difference between Oriental and Eastern Orthodoxy matters.  Normally, you would not receive Holy Communion at Saint Demetrios or participate in other sacraments, though under very special and limited circumstances--such as the inability to attend a parish of the Oriental Orthodox tradition--this may be permitted by our Metropolitan (bishop).

While we welcome all our Orthodox sisters and brothers to Saint Demetrios, and eagerly await when we will fully share sacramental unity, we would not want to have you unwittingly leave your own church tradition.  So speak with our pastor!  If you decide to join our communion, he will guide you in the process.

2.  Prospective members from non-Assembly of Canonical Orthodox Bishops of North and Central America (successor organization to the former SCOBA) Orthodox jurisdictions.  Likewise, even among so-called "Eastern" Orthodox Churches, there are some cases where there is not full communion for complicated reasons relating to church order and discipline, (such as the Greek "Old Calendar" churches in the United States).   Such churches and jurisdictions generally do not belong to the Assembly of Canonical Orthodox Bishops of North and Central America, though there may be some exceptions.  If you suspect this is the case, please discuss this with our pastor.  Joining Saint Demetrios entails joining the Greek Orthodox Archdiocese of America and, by extension, the jurisdiction of the Ecumenical Patriarchate of Constantinople.  Doing so would probably jeapordize your sacramental standing in the church from which you came.  Again, if you choose to join Saint Demetrios, our pastor will be able to guide you in the process.